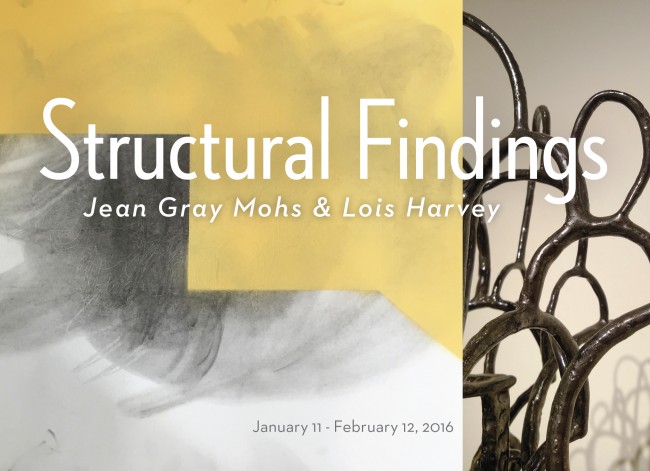 Georgia Southern University’s Betty Foy Sanders Department of Art presents Structural Findings through Feb. 12 in the University Gallery of the Center for Art & Theatre. The exhibition includes an artist lecture Thursday, Feb. 11, at 5 p.m. in the Visual Arts Building, room 2071, followed immediately by an artist reception in the gallery. The events are free and the public is welcome.

Structural Findings features work from Georgia Southern University alumnae Jean Gray Mohs and Lois Harvey. It is a collection of mixed media work and ceramic sculptures that explore the idea of structures in material and in concept.  The exhibition examines the new routines, patterns and relationships that materialize after a pivotal shift in one’s life and offers a tangible representation of how changes in one’s perspective determines his or her perception of the world.

“These artworks attempt to capture and reconcile the transformations that shifted in my role within society after becoming a mother,” Mohs wrote. “The works represent two intersecting and overlapping planes of disharmonic, ethereal space within the framework of an architectural place. The precise use of material and movement is meant to pair a confined isolated space within a more expansive atmospheric place. The resulting architectural landscapes depict a richly layered composition that invites the viewer to look within.”

Harvey uses her ceramic sculptures to translate an intangible physiological experience with the inherently tangible material of clay. Harvey writes, “This past year I transitioned into a new community after moving from Georgia to Philadelphia. This work represents my desire to understand and record how the structures of my relationships and identity have changed through this life experience.”

Gallery Director Jason Hoelscher says, “We are excited to present the work of two such accomplished Georgia Southern alumnae. While their works are compelling individually, when teamed together they highlight and articulate one another very interestingly, creating a dialogue between ways of mark-making in both two and three dimensions.”

Mohs received her Bachelor of Fine Arts in 2002 and a Masters of Art in Teaching in 2008 and currently is an active artist residing in North Carolina. Her work has been seen in Southern Living, Traditional Home and has been shown around the world. She recently released her first illustrated children’s book, “Mamalu’s Secrets,” which can be found at Amazon.com.

Harvey is from Statesboro, Georgia, and received a Bachelor of Fine Arts in Ceramics in 2014. She lives and works in Philadelphia and is on the staff of The Clay Studio, a non-profit ceramic arts education institution.

The College of Liberal Arts and Social Sciences (CLASS) is the largest of the eight colleges that make up Georgia Southern University, and it plays a central role in every student’s core of knowledge. CLASS, also described as the University’s College of the Creative Mind, prepares students to achieve academic excellence, develop their analytical skills, enhance their creativity and embrace their responsibilities as citizens of their communities, their nations and the world. CLASS offers more than 20 undergraduate degrees and several interdisciplinary minors from its 11 departments and five academic centers. CLASS offers eight master’s degrees, two graduate certificates and one doctoral degree. GeorgiaSouthern.edu/CLASS