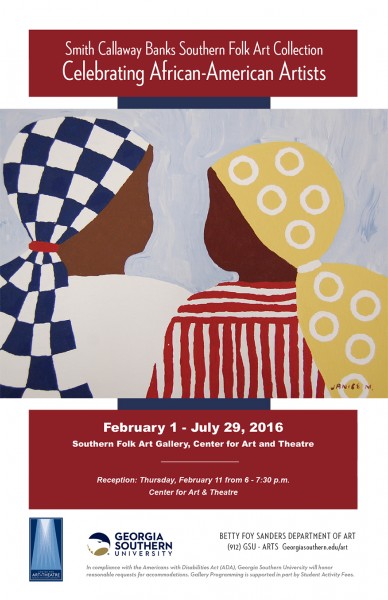 Georgia Southern University’s Betty Foy Sanders Department of Art (BFSDoArt) presentsCelebrating African-American Artists, featuring work created by renowned African-American artists from the South. On display through July 29 in the Southern Folk Art Gallery of the Center for Art & Theatre, the exhibition includes a reception Feb. 11 at 6 p.m. at the Center for Art & Theatre. The events are free and the public is welcome.

This exhibition is curated by Annamarie Kistler, a graduate assistant at the BFSDoArt, from the Smith Callaway Banks Southern Folk Art Collection at Georgia Southern University. Kistler, who is pursuing her master’s in history with a certificate in public history, currently works as the collections manager, overseeing all of the pieces in the permanent collections at Georgia Southern.

“While cataloging the pieces we have in the Folk Art Collection, I realized we have a lot of pieces painted of childhood memories by African-American artists who have not been exhibited in a long time,” Kistler said. “I wanted to do this exhibition to show off these beautiful pieces by these very talented artists.”

Celebrating African-American Artists showcases the personal and intimate narratives of the artists’ most cherished memories, which is what folk art is all about. Its subject matter springs from community and cultural traditions, expressing an identity by conveying shared values and aesthetics.

“Each of these pieces carry something special,” Kistler said. “What is interesting is for some pieces the artist purposefully left out the detail on the faces so the viewer could further connect with the piece by imposing their own memories on the faces in the artwork.”

“The Smith Callaway Banks Southern Folk Art Collection is a treasure trove of styles, ideas, and materials,” said Center for Art & Theatre Gallery Director Jason Hoelscher. “In curating this show, Annamarie has shown a strong curatorial flair for coming up with an exhibition that covers a lot of territory in terms of medium and content, while maintaining a lot of heart in the ideas and scenes put together by the artists. The show is eclectic without being scattered, and definitely worth checking out.”

Works by the artists included in the exhibition have been displayed around the country from the Smithsonian Museum in Washington D.C., to major commissions with companies like Coca-Cola and newspapers such as The New York Times.

The College of Liberal Arts and Social Sciences (CLASS) is the largest of the eight colleges that make up Georgia Southern University, and it plays a central role in every student’s core of knowledge. CLASS, also described as the University’s College of the Creative Mind, prepares students to achieve academic excellence, develop their analytical skills, enhance their creativity and embrace their responsibilities as citizens of their communities, their nations and the world. CLASS offers more than 20 undergraduate degrees and several interdisciplinary minors from its 11 departments and five academic centers. CLASS offers eight master’s degrees, two graduate certificates and one doctoral degree. GeorgiaSouthern.edu/CLASS