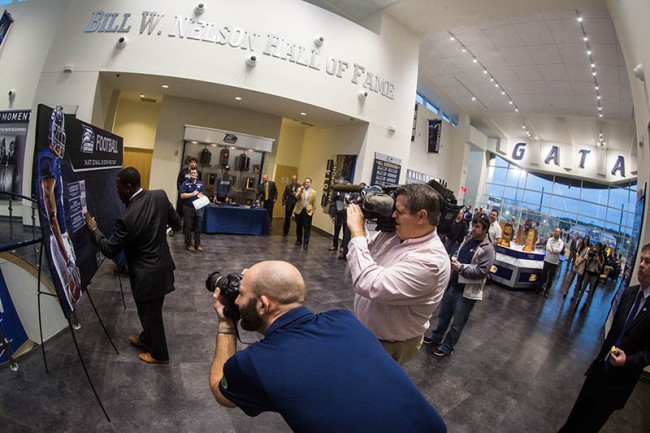 The Georgia Southern football program announced Wednesday a football recruiting class composed of 27 student-athletes, rated by numerous scouting services as the tops in the Sun Belt Conference for the year.

“I’m really excited about the class that we signed today,” said Head Coach Tyson Summers. “I do think that our staff did an exceptional job. We had less than three weeks to be able to put this class together, to be able to hold on to the committed guys that we wanted and be able to push forward and look for what we felt like were the best possible student-athletes in our recruiting area. We were able to go down the last three and four days, go down and win on the wire with three or four kids and for us to be able to close and finish the way we did, it is really a testament to the work and chemistry that our staff has together.

“I don’t think it was any one individual that necessarily signed anybody, I think it was a collective group effort from our entire staff that worked, certainly with the nine on-the-field coaches and all of our off-the-field staff, our graduate assistants, our student assistants and really the community of Statesboro and the big community and family-feel of Georgia Southern that they get from our dining hall, to our dorms, to our campus and everybody that is associated with Georgia Southern. They’re the reason that we’re able to have such an outstanding class.”

The Eagles added 24 student-athletes from the high school ranks along with one prep school player and two mid-year transfers in Darius Roper (ASA) and Alvin Ward, Jr. (Atlanta Sports Academy) to bolster the 2016 football roster.

Georgia Southern welcomed 15 players from the state of Georgia, four from Florida, four from South Carolina and one apiece from New York, New Jersey, Texas and North Carolina.

Georgia Southern will open the 2016 football season on Sept. 3 against Savannah State.