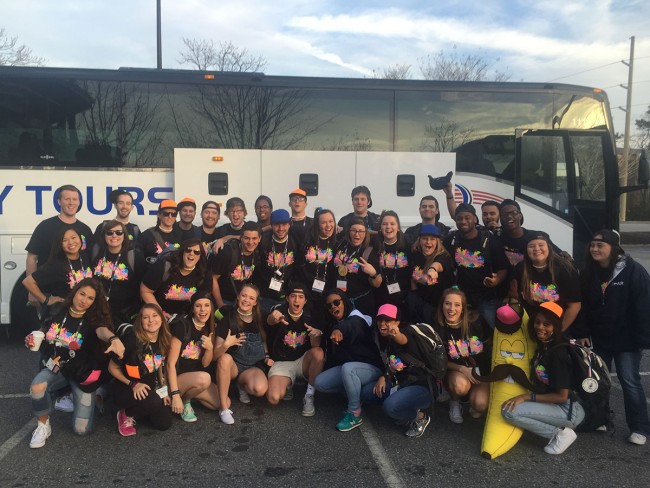 More than 1,900 people from 69 institutions across the Southeast gathered at East Carolina University to learn about other orientation programs, student leadership, teamwork, diversity and inclusion, student and family transition, and to showcase school pride.  For the last few months, the SOAR Team has been preparing to represent Georgia Southern at SROW and their hard work paid off!

The SOAR Team won third place in the Song category of the Song, Skit, Step and Dance competition, which featured teams from 47 of the institutions. The song featured a mashup of popular music with original lyrics that showcased experiences and traditions at Georgia Southern, as well as a performance choreographed by members of the SOAR Team.

SOAR returners, Courtney Dyer and Abbey LaMee, won Best Communication in the Undergraduate Case Study competition out of 11 teams. Participants in this competition had 24 hours to develop a response to a mock orientation crisis, testing their problem solving and teamwork abilities.

Georgia Southern’s “Who Will You Be?” program won the Regional Innovative Program Award. “Who Will You Be?” is a reader’s theater that has been performed by the SOAR Team at freshman orientation sessions since 2011. This program challenges incoming students to think about what kind of member they will choose to be in the campus community.

In addition to these awards, the SOAR Team donated over 5,200 items to the conference service project, benefiting the Food Bank of Central and Eastern North Carolina. This organization provides food and meals to underprivileged individuals and families across North Carolina.

The SOAR Team also competed in a banner, t-shirt, education session and spirit competition. The Georgia Southern SOAR Team proudly represented their institution and built connections with other orientation leaders across the Southeast.

The 2016 SOAR Team consists of 25 undergraduate student leaders who help new students and their families during their transition to Georgia Southern at summer sessions.  SOAR Leaders serve as role models and mentors for new students by helping them connect with other students, register for classes and giving advice on how to be a successful student.